How Does Usain Bolt Train?

A colleague recently forwarded me a short video clip from Usain Bolt’s Instagram account, along with a note that said, “Usain uses anteroposterior hip extension exercises!.”

For those of you who have been following me for a long time, then you know that I’ve long been a proponent of performing horizontal (anteroposterior) based hip extension exercises to complement vertical (axial) based hip extension exercises. See my Load Vector Training (LVT) post if you’re not familiar with the concept (also see my eBook from 4 years ago which heavily addressed the topic). 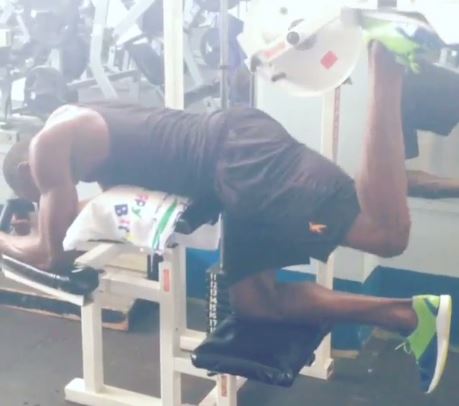 Usain performing pendulum quadruped hip extensions – these can be done underneath a reverse hyper too.

You can also just think of it like this: squats and good mornings are hardest down low when the hips are bent but easy at the top ROM when the hips are straightened, whereas hip thrusts and back extensions are easier at the bottom ROM but hardest up top when the hips are straightened. Both ranges; flexed and extended, are needed for optimal sprinting performance, especially considering that the ground contact phase is characterized by more neutral hip ranges of motion (however there are reasons why axial exercises are critical too which is beyond the scope of this short article).

Usain doing curls for the girls

*UPDATE AS OF 11/30/14, here are some more recent clips: another abdominal circuit video clip, a core circuit clip, a pic of sled work, a pic in between sets of hang cleans, a pic showing Usain hooked up to a crazy electrical muscle stimulation suit, and a video clip showing ankle weight step ups into hip flexion.

Earlier in my strength coaching career, when I wasn’t as knowledgeable and well-versed in sports science, I’d have scoffed at his workouts. I’m sure that the vast majority of strength coaches who read my blog will scoff at his workouts just as I would have several years back. This is unfortunate, as the S&C industry is so quick to make hasty generalizations and be judgmental regarding programs that don’t line up with their vision of what a perfect program entails. 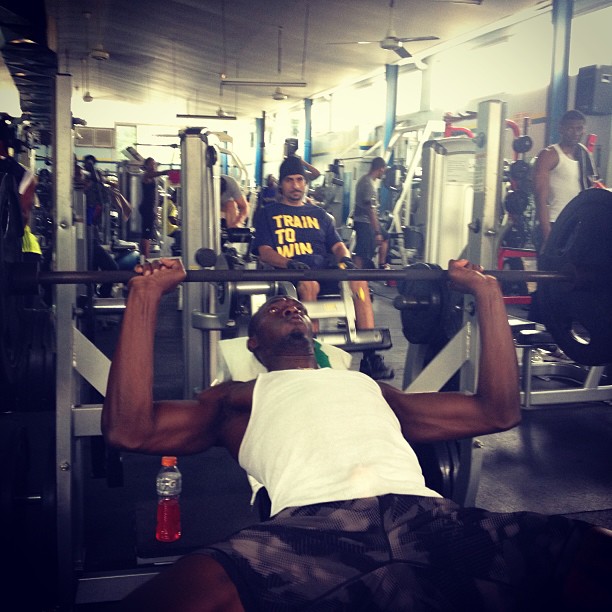 I can’t comment on Usain’s entire training program – in order to do that I’d need to see what his coach has him doing for an entire four year period. Keep in mind that he needs to peak for the next Olympics in Rio in 2016. Therefore, I’d need to see everything that Usain does, from sprinting, to weights, to plyos, to sledwork, to nutrition, to supplementation, to stress levels, to sleep. I’d also need to know his entire history of training and how it progressed over the years.

All I can comment on is the pictures and short video clips I see on Statigram and also these YouTube videos below:

Here are some general observations:

Good Use of Sports Specific Training

The first thing that came to mind was that I liked seeing Usain work his glutes at end-range hip extension on the quadruped machine. It looks like he has some strong glutes at this range which surely helps propel him forward when sprinting . 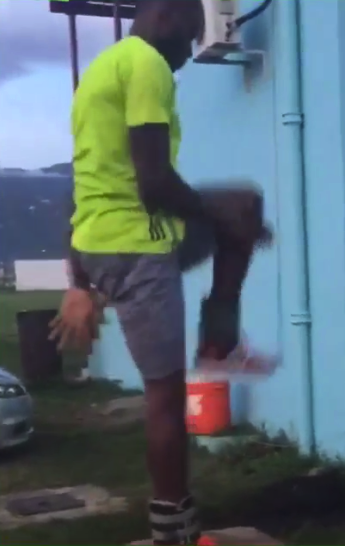 Stride length rises by increasing ground reaction forces. But you want the force to be directed appropriately – when individuals direct their force production with more forwards orientation, they sprint faster.

Horizontal ground reaction force production comes mostly from the hip extensors and knee flexors, according to a brand new study HERE.  This information jives with other findings that Chris and I covered in our sprinting product.

My guess is that what makes Usain so great at sprinting is his superior horizontal force, horizontal power, and direction of force application technique, which are attributable to his anthropometry, glute and hamstring leverages, and superior fiber type percentages. It also helps that he’s from Jamaica, where sprinting is prioritized!

Getting back to Usain’s training – he uses very good form on the pendulum quadruped hip extension and doesn’t hyperextend his lumbar spine. This is even more impressive considering the marked anterior pelvic tilt that he exhibits.

I also liked seeing Usain perform some cable hip flexion and other exercises to work his hip flexors. There exists some good research to support training hip flexion for speed gains. Moreover, I like seeing hip flexion being trained in a manner that resembles sprinting posture. 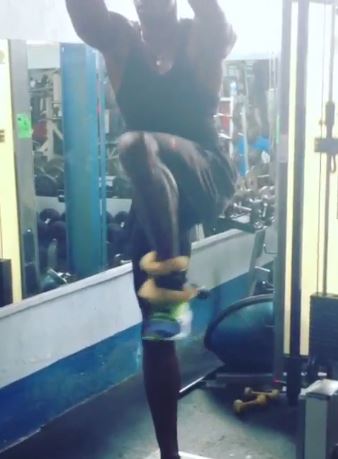 I read that Usain’s favorite exercise is the hang clean and that he despises squatting. It’s important for an athlete to feel comfortable with an exercise and not be worried about injury potential.

The majority of my colleagues would scoff at Usain’s hang clean technique. The internet loves to bring out the form police (kettlebell people are the worst in this regard, but Olympic and power lifters are guilty of this too), but I can tell you that Usain is still using his hip extensors explosively to catapult the barbell upward. Sure he’s using a lot of upper body English and getting increased arm, shoulder, and back effort, but his hips still receive an explosive training effect, even with the shorter ROM. 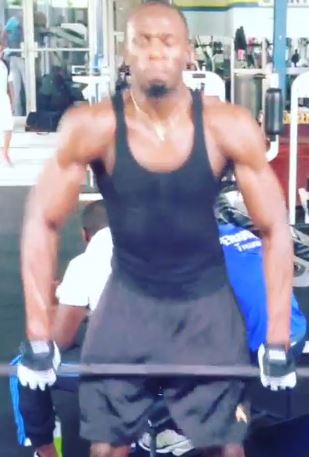 Moreover, it appears that he sticks with 135 pounds when he performs these and doesn’t try to increase the weight over time. So even though he might catch the load with a slightly hyperextended lumbar spine and the elbows pinned down, it’s not likely to cause problems. The point is that Usain has found a power exercise that he enjoys and can perform consistently over the years.

I liked that Usain trains his whole body – abs/core, lower body, and upper body. The body is a unit – a kinetic chain of links that work together to maximize speed. While certain links are more important than others (glutes and hammies), all of the body’s muscles must be powerful and coordinated for optimal performance. A strong core can help protect Usain’s spine by transferring forces more efficiently and sparing the lumbopelvic structures. 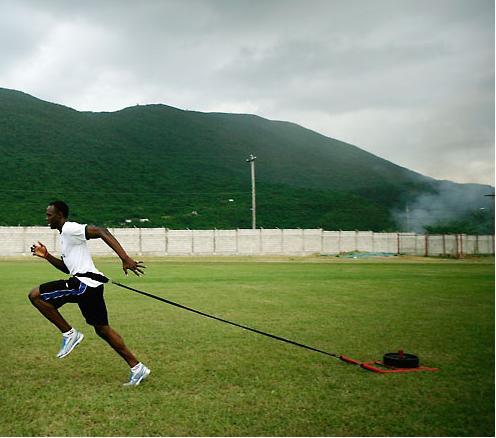 I once heard Usain’s coach Glen Mills mention that he felt that weights and sled work aided Usain’s development as a sprinter tremendously over the years by increasing leg mass and leg strength. Usain has mentioned that he doesn’t like weight training that much and that he isn’t gym strong. Many high-caliber athletes feel this way, and I believe that they intuitively understand that their bodies are unique and that too much resistance training can hamper their performance. Athletes like this gravitate toward lower volume training and are protective over their strength reserves.

I haven’t seen Usain train in person. I read that he performs machine squats, so I’m not even sure if he performs barbell squats, RDLs, or full range Olympic lifts. What I will tell you is that based on these videos, Usain is sparing his CNS for the most important activity for speed development – SPRINTING! 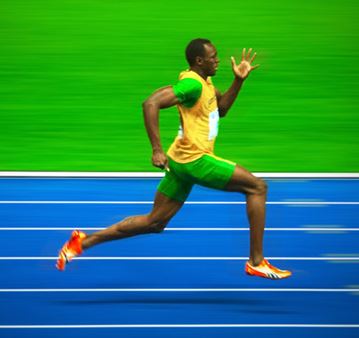 Most strength coaches, upon acquiring a world-class sprinter, would screw him up by imparting their strenuous programs upon the athlete. Usain has the fast-twitch muscle fibers. He has ideal body length proportions. He has the rapidly firing nervous system. He’s spent years developing sprint qualities and honing his technique. The last thing you want to do as an S&C professional is screw things up by radically altering his programming.

Training him to be the strongest lifter he could possibly be would detract from his sprinting performance. Don’t get me wrong, I’m all for intense lifting for athletes. But if you had Usain training like Stan (see video below), grinding out heavy loads week in and week out, his sprinting speed would diminish.

Strength training should complement sprint training, not interfere with it.

I saved the most important consideration for last. You want to know how Usain will remain at the top? By remaining healthy! If he stays injury-free, he can continue to maintain his performance (or even make small improvements for that matter). But if he herniates a disc by rounding the low back while pulling too heavy of deadlifts, develops patellofemoral pain from heavy squatting with knee valgus, or irritates his SI joint from performing back extensions with too much low back arch, then the weight training would severely hamper his performance.

Furthermore, if he fries his CNS by overemphasizing heavy strength training for months on end, then he’d likely end up hurting himself as a result of a fatigue related injury – perhaps a hamstring pull on the track. 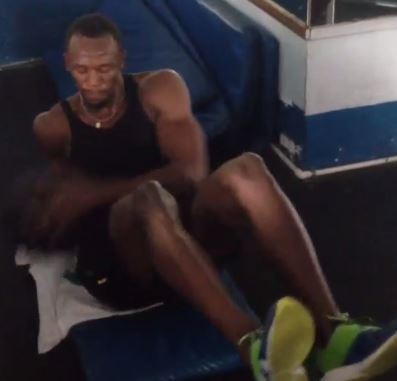 The exercises that Usain employ are not very risky. They don’t lead to high levels of joint stress or muscle damage, they’re performed with higher repetition ranges, and Usain seems to be enjoying himself. This is important because Usain should have a positive outlook on weight training and be committed to his training.

Again, I’m not aware of how Usain trains year-round, and all I can go by is the limited information I’ve found on the web. So take that for what it’s worth. However, based on what I see, I feel that Usain does a great job of providing a general hypertrophy and strengthening stimulus to the muscles that are important for sprinting, while allowing him to devote the majority of his attention to sprinting. I also feel that this training helps keep him healthy and is complementary to his track efforts, which is critical when you’re Usain Bolt! 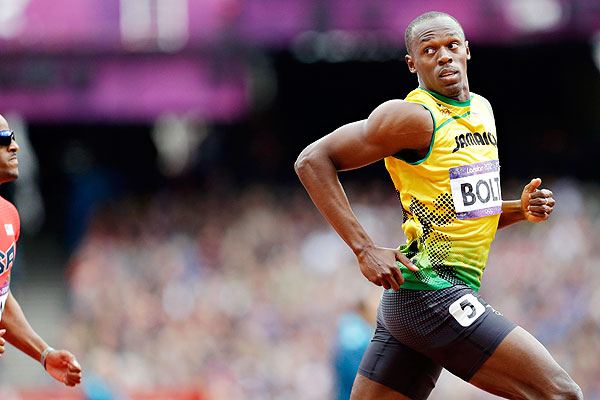 The post How Does Usain Bolt Train? appeared first on Bret Contreras.